This is an interesting iPad app which allows the user to draw vectorized sketches which can be zoomed into as far as the creator has drawn. These images don't do the idea justice so click here to explore some completed sketches!
Posted by jb at 4:01 PM No comments:

I just saw Tuttuki Bako today on a website. It's quite innovative I think and serves to remind just how limited we can be in the ways we think about interactivity.

This new interactive toy from japan involves sticking your finger in a hole on the side of the box to interact with a virtual environment. Bandai’s new Tuttuki Bako handheld interactive plaything requires you to twiddle your finger around inside the orifice to play with a variety of virtual characters on an LCD screen on the front of the device. There are six play modes ranging from pushing around a tiny little person, to ticking someone’s nose, to petting a pint-size panda bear. Sought is a narrative driven maze game with multiple endings. It's interesting because of the way the story is told - the player is presented with an introduction and is left to piece together a larger picture through an array of different endings that can be completed in any order. The interactions themselves are very simple with the desire to learn more about this strange world the main motivation for progressing. I haven't seen many free indie games with voice acting so that's also something that drew me to this game which is just as much a short story than anything else.

I've been experimenting further with 3d spaces in a project which is shaping up to being quite unique in terms of both concept and aesthetic. 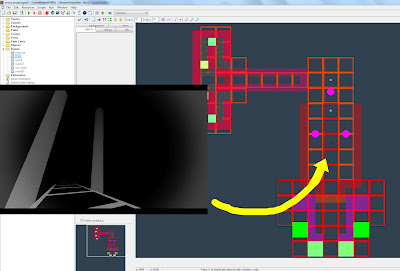 Mapping these spaces can be quite challenging as the editor I'm working in is entirely two dimensional. The image above shows a screenshot of game play placed next to the grid based layout which the world is designed in. The biggest issue with this interface is that there is no real allowance for a display of depth meaning that positions and shapes of objects must be kept track of mentally. To add additional complication to this method, I have been experimenting with non-Euclidean spaces such as endless corridors and impossible rooms. This is all very much an illusion and so the mapping of such can become rather hectic as resources are placed over the top of one another from a frustratingly static birds eye perspective.

In terms of narrative flavour, I've been quite inspired by Kafka's short story Metamorphosis in which the protagonist awakens as an insect. This concept and the absurdist nature in which it is depicted offers interesting parallels to the way we as humans perceive space. Just how direct this influence will become I am not quite sure but at the moment it is a good starting point to build from.

As far as game play is concerned, I don't think there will be any real mechanical or reflex based challenges in the game. Instead I'm opting for a more thoughtful explorative pace where the challenge becomes the navigation of the world itself. A simple premise such as collecting objects or reaching gateways to new areas could be a possible 'goal' if one is to be had.

As well as writing I've been developing an aesthetic around the 3d spaces I was working on a month or so ago. It's monochromatic, full of static and distortion but quite 'clean' at the same time. This seems like the perfect mode to explore non Euclidean laws through. I have a title, it's 'Invisible Cities' - a space of warped geometry, philosophy and isolation. I'm not exactly sure what this means or what I will do with the idea but for now, here's a glimpse of what it looks like so far:

It's been a while! I've been busy working on starting my thesis so I didn't do any updates last month. I think the blog is a powerful research tool and I really don't want it to become neglected as this project continues. Because of this I'm going to try and get things back on track by keeping up with the posts. 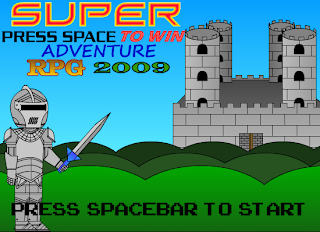 Super Press Space To Win is described by the author as an 'Action RPG' and is ultimately a parody of RPG convention, dealing with many of the tropes of the genre through a simple system of interaction which utilises only a single button (the space bar). RPGs have been criticised for some time about the repetitiveness of certain mechanics (battling monsters, collecting items) so this game plays on that repetition by using one button to do everything. Additionally, the linearity of a lot of these games is highlighted, SPSTW will doing things like ask the player a yes or no question but since only a single button is employed, there is no way to choose a different answer.

I think the game is interesting because it's one of the best examples I've seen which demonstrates the illusion of control on part of the player. The only way to 'oppose' the games mechanics is to simply 'not' press space. The frequency between presses and time spent reading text affords the player more agency than the game perhaps realises. I wonder if it would be possible to make a game where the player has literally zero agency in the progression and manipulation of game space but still perceives themselves as having some sort of control.

Also, the game has quite cool, over dramatic voice acting!

I have been  creating 3 dimensional environments exploring the possibilities of virtual space. Initially I was just experimenting with the world, trying to think of ways to implement non-Euclidean geometries inspired by the games I looked at in my previous post.

When coding the virtual camera there is a parameter that defines the field of view of the screen. I accidentally entered the 'wrong' number and discovered some pretty exciting results that enabled the field of view to extend beyond that of a human eye. This produces some pretty warped and twisted visuals that completely disorient the player - a fish-eye-like effect hat can be extended to impossible extremes.

Beyond the visual intrigue of this experiment, such technique opens up a unique dialogue in the discussion of virtual space. Bending the 'field of view' effects the virtual camera, adjusting the way which we as an audience experience a space. The significance of this is that despite appearances, the actual game space remains unchanged, objects occupying the same coordinates of Cartesian space despite the apparent ocular aberrations which may occur.
It is not the space that is changing, only our perception of it.

This concept highlights the relativity of our own spacial experiences; we expect virtual worlds to behave a certain way based upon the understandings we have of our own and when they don't conform, these spaces become powerful mechanisms of affect.

jb
I am a university student currently doing my masters in screen and media studies with a focus and interest in digital cinema production.

I Remember The Rain 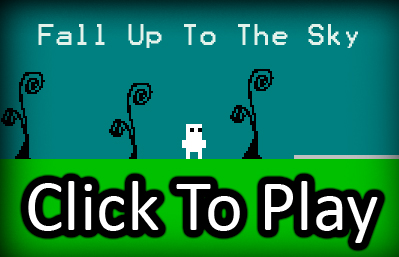 An experiment with gravity

This site is a development blog of my research, thought processes and creative works for my master's degree at The University of Waikato in New Zealand. This is a practice-led research project exploring interactive worlds, their constructions, how we perceive these worlds and the energies operating across spaces both 'real' and virtual.